Welcome to CosBond’s first cosplay tutorial series featuring Astrid from How to Train Your Dragon: The Hidden World. In this tutorial series, we’ll show you how we created Astrid’s axe, armor, and helmet using CosBond products for many of the adhesive applications. Our goal is to not only help you make Astrid (if that’s your goal), but also to show you some techniques and applications that you can apply to any other cosplays as well.

All of our tutorial videos will be posted on our YouTube and our Facebook Page, but these tutorials on our website will also provide some extra step-by-step information, the materials and tools we used in each video, and some more tips and tricks to help you along the way.

“Astrid, 20, is the self-assured, competitive champion of the Dragon Races and Hiccup’s longtime girlfriend. Beautiful despite herself, she’s tough and rational, providing Hiccup with a blunt voice of reason while remaining his most outspoken supporter. A strong sense of duty defines Astrid to the core. She will always do what must be done without regard for herself. So when trouble threatens the people and dragons that she loves, Astrid stops at nothing to defend them, even if though that means going rogue and defying Stoick’s orders.”

The cosplay that we’re working on features Astrid’s dragon scale armor which is intended to mimic Astrid’s dragon, Stormfly, in many ways. The armor is made of several different pieces, and our cosplay includes the helmet, pauldrons, chest plate, torso guards, skirt, gauntlets (forearm and wrist guards), kneepads, and boot covers. As with any cosplay, we took some creative liberties — some because of time (we were getting ready for C2E2 in Chicago) and others because we felt they could be omitted without ruining the overall look we were going for. For example, Astrid’s actual armor also features two wing structures that help her fly when necessary, but since they’re usually folded and invisible (and since we weren’t planning on flying) we decided to omit those. Also, her armor extends through the legs and boots; we decided a pair of brown tights and brown boots would suffice.

Some of the details of Astrid’s armor made this project particularly interesting for us. For example, Astrid’s suit is supposed to be made out of the scales that Stormfly has shed, so they feature an iridescent blue color with hints of green and purple. Since these scales came from Stormfly, they make the armor effectively fireproof (which is cool, but we didn’t go that far). The scales are attached to what appears to be a leather base (and according to the movie, they were attached using Toothless‘ sticky saliva – yuck!). Since we didn’t have that particular adhesive at our fingertips, we had to figure out a more creative way to add scales to our cosplay — you’ll see that when we get to the armor. We also incorporated the small metal skulls details around Astrid’s waist belt and the various spikes that mimic Stormfly. 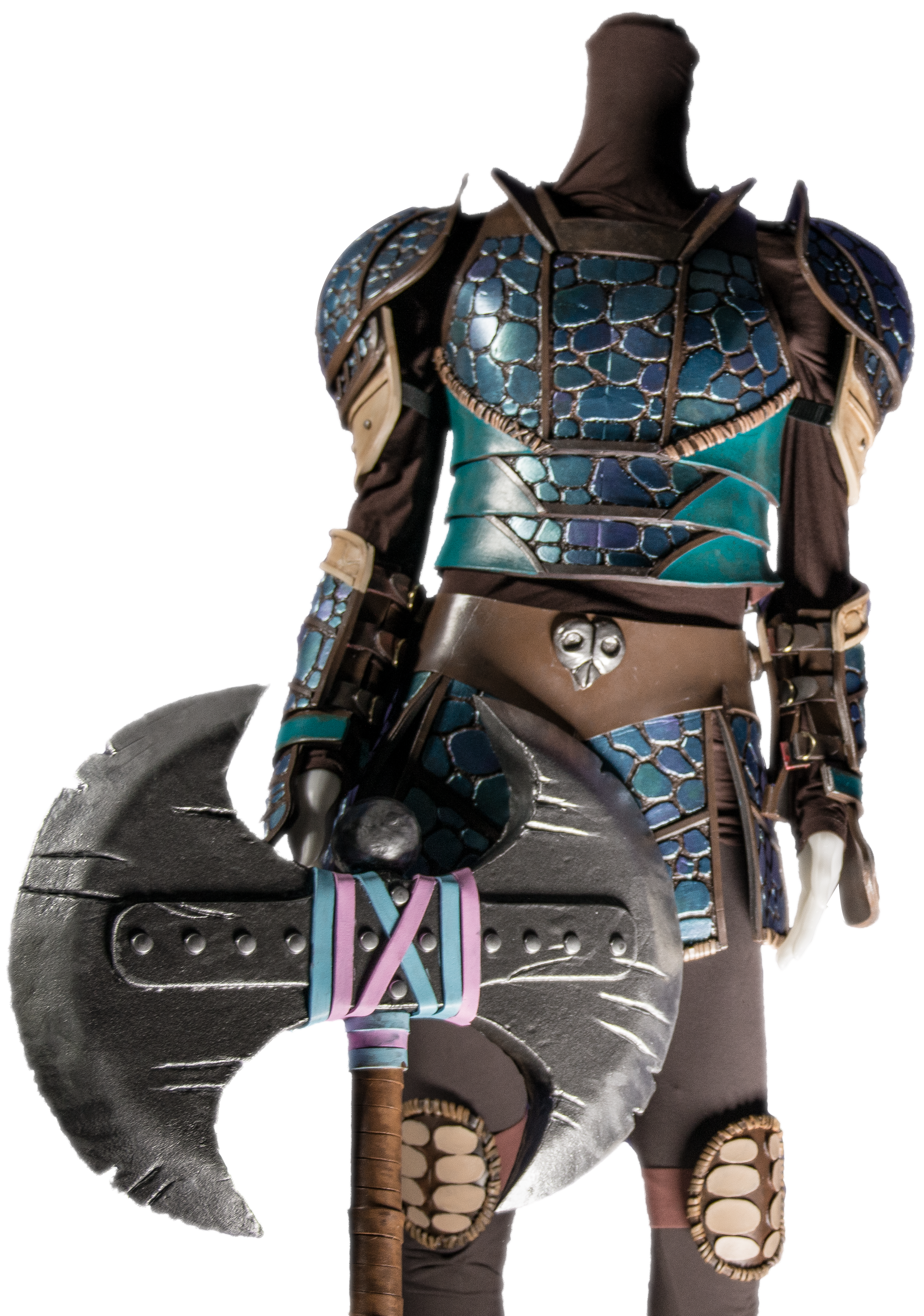 According to Fandom.com, “It is implied that Hiccup crafted Astrid’s new axe and made her a saddle which is accommodated to hold an axe in place during flight.” Much like her armor, we loved some of the details in Astrid’s new axe. Unlike her old axe, Astrid’s new axe is double-edged and has a longer handle which is partly covered with fur. The knob at the end of the handle features metallic dragon heads on each side — one appears to be a Deadly Nadder while the other resembles a Night Fury. One of the things we definitely wanted to tackle with this axe was to make sure it was easy to transport. Besides C2E2, we knew we wanted to feature this cosplay at Phoenix Fan Fusion and other cons that we’re attending, and we wanted to make sure the axe could be easily shipped.

We’re really happy with how Astrid turned out. We may go back at some point and tackle some of the pieces and details that we skipped (stay tuned for updates). But for this cosplay, we really liked where it ended up. So keep checking in on our blog, our website, and definitely make sure you sign up to receive updates from CosBond to get the latest on our Astrid cosplay tutorial.

Ready to get started? Here’s how we got started by patterning, cutting out, assembling, and sanding Astrid’s axe.