While cosplay has been around for many, many years, you wouldn’t necessarily think of modern cosplay as “old-school.” More often than not, cosplay is thought of as innovative and cutting edge, but underneath all the new techniques and products, craft basics are often what’s holding the entire cosplay together. There’s a huge case to be made for using more traditional crafting supplies and adhesives along with the new and trendy materials. Just one of those old-school adhesives is Mod Podge (and all of its generic equivalents).

Mod Podge, a craft adhesive that’s been on the market since the late 1960s, is an all-in-one product with multiple useful cosplay applications. In this post, we’ll discuss the value of using Mod Podge in cosplay as well as the benefits and challenges of working with it. 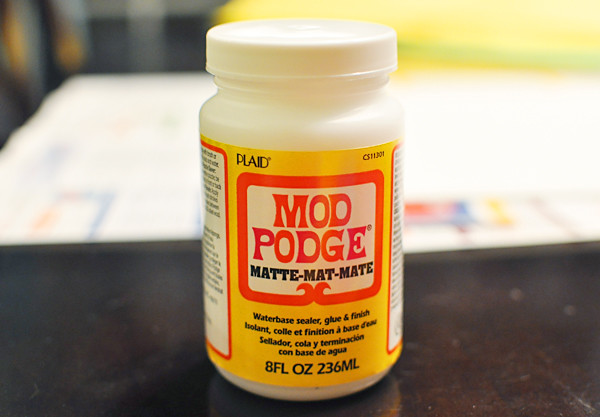 Mod Podge is the most common brand name for a type of adhesive and sealant that is, as its simplest, a diluted form of permanent white glue. Traditionally, Mod Podge was used as a glue, sealant, and finish that was used for decoupage, or the art of covering objects in decorative paper. In terms of cosplay, Mod Podge actually has a wide variety of uses in each of those roles: glue, sealant, and finish.

To start, Mod Podge can be used for its intended purpose in cosplay. If you’re working with paper or cardboard, Mod Podge is among your adhesive options for simply adhering your pieces and parts together. In most cases, Mod Podge is best used for adhering flat layers of paper or cardboard together as opposed to along end seams or thinner areas. However, it can also be used as a general adhesive when you’re working with foam. It’s especially useful for stacking sheets of EVA, L200, or insulation foam on top of one another to create thicker pieces.

Perhaps the most common use for Mod Podge in cosplay, however, is as a sealant. Mod Podge is typically sold in jars and intended for brush-on application, making it a perfect option for sealing your foam armor or props before painting. When brushed on carefully and allowed to cure, Mod Podge can create a smooth seal over the surface of your foam that allows your paint to lay flat and keeps your foam from soaking up your paint.

Finally, Mod Podge can be used as a protective finish over the final layers of your cosplay. Brushing on just a thin layer of Mod Podge is an easy way to protect your cosplay’s paint job from chipping or cracking. Additionally, if you’re working with glitter, it’s a great way to finish the glittery surface so that you’re not dropping little particles everywhere you go or rubbing off on other parts of your cosplay (or other people, furniture, etc.

There are several reasons why Mod Podge makes a great adhesive and sealant for cosplay. Here are just a few of the benefits of working with Mod Podge:

As a sealant and an adhesive, there are also a few challenges to working with Mod Podge as well. Here are just a few you should be aware of:

Mod Podge as a Sealing Option

When it comes to sealing foam or priming thermoplastic, you have several adhesive options to choose from. With Plasti-Dip, aerosol foam sealer, PVA glue, and wood glue as just a few other alternatives, Mod Podge is just one of many choices you have to work with. It might take a little experimenting to decide which sealant you like the most, and as will all of the options, there are both positives and negatives to sealing with Mod Podge.

While it doesn’t have the flexibility of something like Plasti-Dip and would take longer to apply, Mod Podge does have the advantages of lower costs and the ability to use it indoors in a small space without making a huge mess. The sealant you choose will likely have a lot to do with the needs of your cosplay and the time and budget constraints you’re working with. Either way, it can always be helpful to having multiple adhesive options on hand, including Mod Podge, so that you’re prepared for anything that might come up during your build.